The sheer endurance and commitment of Jonathan’s mother and family is a testament to the power of hope and love.

Thank you to Jonathan’s mom  for sharing their story. 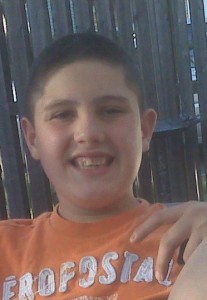 My son, Jonathan is now 16 years old. Jonathan was diagnosed with autism at an early age (1 1/2). After the initial shock of the diagnosis, my husband and I jumped right into researching therapies for him. My husband (now ex) worked for the Department of Corrections in Hudson County. He put in for a shift change (working 4-midnight) so that I could continue working full time in New York City and he could take Jonathan to all the various therapies (early intervention, ABA and speech therapy) everyday. I had to continue working because insurance benefits did not cover any of the therapies since they weren’t deemed “restorative”. If he never had speech, there was nothing to restore!

Jonathan has never been that “autistic” child that is meek and mild. He has been a firecracker since Day 1 challenging all the therapists. When something is not going his way, he is aggressive. As he got older, the aggressions, self injurious behaviors and violence continued to escalate. Needless to say, due to all the pressures of having an autistic child, my marriage broke up. I think it was because we could not do anything together. I would stay home with Jonathan, or my husband would stay home. Vacation? What was that? Our vacations consisted of renovating our house to install all safety glass windows and wood wainscoting on the walls (due to Jonathan’s kicking holes in the walls). We had to get safety glass windows because Jonathan decided one day to kick one and received 80 stitches in his leg (as well as a traumatized mother). We did try one time to go to Cape May but after two days of Jonathan trying to open the hotel door a million + times (because it had no lock from the inside), we decided to cut the trip short.

I’ve been to every doctor imaginable, trying every kind of treatment (secretin infusions, diets, holistic treatments, medications, etc). We’ve even seen a doctor that traveled in from California monthly to treat autistic children. Nothing seems to diffuse Jonathan’s behaviors. Jonathan even started having seizures (4-5 times a day) for a four month period. Turns out that the “mood stabilizer” Depakote was causing the seizures. Strange since Depakote is an anti-seizure medication. Needless to say, my marriage broke up. There was just too much tension. Even my older son didn’t want to be there. Why should he? He couldn’t have any friends over because of Jonathan’s impulsive and aggressive behaviors. Also, Jonathan’s reputation in the neighborhood was legendary. One time when I thought Jonathan was happily taking a bath and I was down in the basement doing laundry, Jonathan heard the ice cream truck music. Well, he proceeded to get out of the bath and run outside to the truck – naked! Now you have to picture this… Jonathan was overweight (due to meds), bloated and full of bruises (due to self-injuries). Needless to say Jonathan’s presence cleared the line to the truck and the stunned ice cream man gave him whatever he wanted. I was mortified and couldn’t show my face in the neighborhood for some time. Can you imagine your neighbor coming to your front door to tell you your naked son is harassing the ice cream man?

I can go on and on about these types of incidents. I’ll save that for the book I should write. In 2005, Jonathan’s aggressions became overwhelming. Everything in my house that was of any value was pretty much destroyed. Bed frames, pictures, furniture. Medications weren’t having much effect on controlling the behavior. I reached out to my school district begging for help with him. I had researched an afterschool program (New Horizons in Autism) that I thought could help. If Jonathan was busy, he was not getting into (that much) trouble. Since Jonathan’s behaviors were so severe, New Horizons would need 2 staff to take him on. Due to the expense, my school district deemed it “not necessary”. I had to reach out to a lawyer to figure out the next steps. After over a year of going back and forth (and thousands of dollars in fees), I was starting to get defeated. I couldn’t control Jonathan anymore. When my oldest son had to sit on Jonathan so that he wouldn’t attack me, I finally lost it. I called the school district to suggest possible residential treatment. That was also ignored, even after sending my case worker video of Jonathan’s tantrums. It even came to the point where the Superintendent of Special Education would not even call me back. I had to call the Superintendent of Schools to get her to return my calls. Then, even that didn’t work. I even reached out to the mayor of my town, to no avail. Finally, I was told to try to go to the members of the Board of Education. I remember sending an email around 4PM. Around 20 minutes later, the phone started ringing and the emails started coming in. The Board of Education did not know anything about my situation! They assured me that they would take care of it and quickly. They asked me to attend the following Tuesday’s board meeting. At this meeting, I was like a celebrity. Finally everyone wanted to talk to me – the case worker, Superintendent of Special Education, the Superintendent of Schools and even the school’s attorney. They all assured me that they would solve this dilemma. However, one particular board member told me that if I could, please make a speech. Since the board meetings were televised on the local cable channel, it would ensure that there would be some visibility. After what my sister calls my “Golden Globe” speech, I left the meeting in tears. Again, I was assured that they would work it out. Well the next day (which happened to be my birthday), Jonathan was approved for residential treatment at Bancroft School in Cherry Hill, NJ.

After a few weeks of getting our ducks in a row (medical reports, immunizations, etc), Jonathan was going away. I packed up his toys, blankets and everything he liked to bring to his new room. During the whole time of “checking him in”, the tears would not stop. I had to leave my baby here and trust that it was the best thing that I could do for him. Jonathan, of course, did not know what was going on. All he knew what that his parents dropped him off and left. I went home and cried, cried, cried, slept, cried, cried, cried, slept for days. I would get updates from the school a few times a day. Seems Jonathan would not eat anything substantial. He was living on cheese and some popcorn. The case worker and I together discussed the situation. You see, I wasn’t even supposed to see Jonathan for at least 2 weeks. I knew Jonathan was confused; he didn’t know what was going on. We decided that I could pick up Jonathan that Friday and take him home until Sunday to see how it goes. Of course that Friday night was a major snowstorm so it took six hours to drive there and six hours back. But I was determined to get my boy. I guess I was like a mirage to Jonathan. He never sat so still in a car before for so long. That Sunday, we brought him back to a little drama, but it was definitely better. From then on, we took Jonathan home on the weekends and brought him back on Sunday (driving 400 miles for both trips back and forth). However, it became routine and changes started happening.

Jonathan came home after 9 months a totally different child. He was 70 lbs lighter, and best of all manageable. We were able to take Jonathan places – to the pizza parlor, to the store, without panicking. Jonathan also went into the afterschool program and for the first time in his life, went to an amusement park. It’s been 3 years since he’s been “out” of residential care and things are going well. Believe me, there are moments (again I’ll save these for my book), but for the most part things are quiet. He goes to school/after school from 8:15 am and gets home at 6:30 pm). I guess he’s just too tired to cause any trouble.

So after this long winded story, the reason I am writing it. I have one “professional” picture of myself, Jonathan and my oldest son Anthony. Unfortunately, Jonathan was 7 at the time. It was taken in the break room at our local ShopRite by a photographer. After that experience, in which Jonathan set off the emergency alarm since he opened the “Don’t open unless it’s an emergency” door, I rely on his school pictures every year. I always just hope for the best when the pictures are returned.

Thanks for taking the time to read the soap opera that is my life. 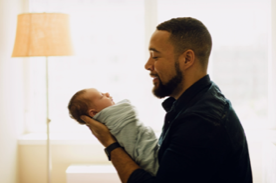 With the birth of our Son, my wife and I wanted to be sure to capture this beautiful moment in our lives. Chris was an absolute joy to work with! She checked in to wish us well ahead of Caden's birth and patiently guided us through the process of choosing backgrounds, outfits, etc the day of the shoot. Most amazing was her patience with Caden's unpredictable baby nature : Hungry one moment, calm with eyes open, poopy time, sleepy time, crying time. She was willing to spend over 4 hours with us waiting for the best moments to capture the best shots of Caden. We cannot recommend her highly enough! THANK YOU!