Last week, I received this video along with the second entry into my 2010 Autsm Campaign.  Please watch, it’s simply beautiful.

Thank You to Andrew’s mom for sharing his smile with us.

Andrew is our second child. He was conceived soon after the birth of our 1st child, Brian. I always say that he was a result of the emotions we were feeling the days following September 11, 2001. We were a young family then with a 4 month old baby and we clung to one another following that life changing event. Andrew was born the following June. We bought our first house and moved out of the one bedroom apartment we were renting while I was pregnant with him. He was such a good baby. But I also remember sensing something unique in him on the day of his birth. I noted this to my husband. I saw something in his eyes and told my husband that the way he looked at me was as if he held the wisdom of a old man who had lived a lifetime, and not the newborn baby that he was. He barely cried. He was perfectly content hanging out in his basinet, which was much different than his brother who would cry until I picked him up. I am a special education teacher and was teaching in a preschool handicapped classroom while pregnant with Andrew. Many of the children that I had taught were on the Autism Spectrum, so Autism was not something I was unfamiliar with. In fact it was something I was very hyper aware of and would almost look for signs of Autism in my children out of worry. So when I would enter Andrew’s bedroom, at 3 months of age, and he would be happily kicking and cooing, totally engrossed in his mobile, I would call his name and hold my breath that he would turn his little head away from the mobile and peek through the crib bars at me. But he wouldn’t. I would tell myself that I was just being way too hyperaware. He was much too young for me to be concerned about Autism. And I would quickly put those thoughts out of my mind. Until next time when he wouldn’t turn again. I was constantly analyzing him. He would look at me and laugh like all babies did, but why did it feel like I had to work harder for his attention than I remember having to do for his older brother. Every concern I ever had was quickly put to rest by some well meaning comment from others such as, “you can’t compare”, “all children are different”.

Months went by and more red flags were there. Lack of eye contact. Not responding to his name. Few words. Loss of words he did say. I knew I had to take this to someone other than family members who would dismiss my concerns as just me being a worrying mother. So, I made his well care appointment that was meant to be his 15 month visit a month early and brought him into the office at 14 months. I started to list all of the red flags I was seeing to the doctor. We moved on to a hearing evaluation to rule that out. I called Early Intervention for an evaluation. He qualified for services. We made the appointment with the neurologist. The earliest they would see him was six months. Finally after all was said and done, my concerns were justified with the official diagnosis of an Autism Spectrum Disorder three days shy of Andrew’s 2nd birthday.

Now, at age 7 (going on 8), Andrew is still the same baby I held in my arms in June 2002. He has made great progress, but still his language is limited. He brings so much joy to us every day and makes us so proud to be his parents. We have had another child since then too. A daughter, Kaitlyn, now 2 (going on 3). Another June baby. She is doing wonderful and is Andrew’s best playmate.

Life with our three is full, complete and I wouldn’t change a thing. Autism is not always easy. But it is what it is. We work hard every day to help Andrew reach his full potential. We love and accept him for who he is completely. 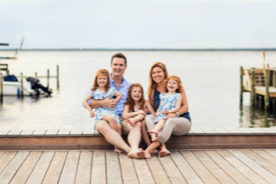 We just received the photos from our second shoot with Christine and we were thrilled again! The first shoot was for family beach photos with our toddler, and Christine captured the life and spirit of our daughter at her favorite place, the beach! This last shoot was for our newborn twins and their big sister. Christine and David brought all the accessories and backgrounds that allowed the photos to look professional but still be in the comfort of our own home. The photos are absolutely stunning (and the edits came fast -- which was great, because I was so anxious to see the finished products!) I'm rearranging walls in my house to accommodate more! Christine and David are a pleasure to work with. Since they are parents themselves, they handled and positioned our newborns with ease and they know how to interact with toddlers. I love all of my photos and can't wait for the next opportunity to do a shoot! Time to re-do the beach photos now with all 3 kids!